Breaking news
Karishma and I are in a very happy phase: Upen…Tata group requests staff to give up use of subsidised…Bihar court orders FIR against Giriraj SinghFIR against Union Minister Giriraj Singh3 Army personnel killed in Arunachal ambush

Mahendra singh dhoni a man on which we can rely .Now a days a hot topic in media is to remove Dhoni from captaincy.I’m not going to support him from his past record.Never going to say that what he has done for us in past is approving him to lead all his life.But i will say only one thing that as a player he is far better than any other player in the team.I’ll say one thing if he has used to play up the order in the onedayers,he might have scored 30 centuries till now may be more than that.But he sacrificed this for being a finisher for team India in crucial situation.Many people will say he can come up the order in test matches but as a independent viewer i’ll say he gives newcomer(after the retirment of big guns like sachin,laxman,dravid) a fair amount of chance to play with pure batsman at the other end.Not let them play with tailenders with them he used to play.If we will talk about onedayers than he is one of the best batsman of this era.we can say him best oneday team captain for India.He almost have every record on his name in onedayers like winning all big tournaments for India 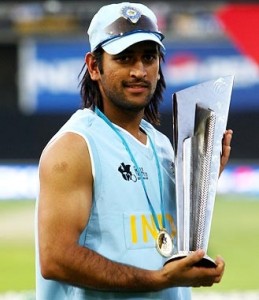 Now a days or we can say the cricket teams are performing well at there home .Whether this is SA,AUS,ENG.India is always criticized for making spin friendly wicket but i’ll add here only one line here whether AUS,SA,ENG are Not making pitch which is friendly for them.So we should stop giving too much attention to Home and Away series Performances.I’m not saying that don’t try to win matches  abroad or we should not say anything when Our team is losing matches abroad but instead of this we should focus on a positive way to improve our performance abroad.

So, For Dhoni criticizer i’ll only say one thing Let him play another 3-4 years of cricket on his will.Not suggest him that how to do captaincy and how to play cricket.He may be removed from the captaincy but as a player nobody has ability to replace him.For Me He will be a leader always.